Dressing Up The Selena Quintanilla Way: Be a Queen Like her

When you hear the name of Selena Quintanilla, two things come to mind: her memorable hits (here’s looking at you “Dreaming of You” and “Bidi Bidi Bom Bom”) and her show-stopping fashion statements. There’s no doubt that Selena Quintanilla’s outfits continue to inspire adults and little girls — even if it has been more than 25 years after her passing.

On stage and behind the scenes, the Queen of Tejano was known for her elaborate and unforgettable outfits: sheer crop tops, bedazzled bustier, bolero jackets, curve-hugging high-waisted jeans and who could forget the iconic Selena Quintanilla purple outfit (that jumpsuit haunts our dreams every night). And the best part about Selena’s outfits — she designed and produced them herself!

Top all of that with her signature red lipstick.

It’s no wonder that many people wish to channel their inner Selena Quintanilla by their outfits. But many worry they can’t pull it off. Plus, where do you even start with this fashion venture? What clothes do you need to look like you stole Selena’s outfits from her wardrobe?

What Kind of Clothes Did Selena Quintanilla Wear?

Just like her music, Selena Quintanilla’s outfits were a combination of different styles. During the height of her popularity, ‘ethnic’ clothing wasn’t considered ‘cool’ by the fashion scene. She didn’t care though; Selena was always mixing her styles to create an outfit that showed off her heritage, which made her stand out against other celebrities.

Before she met a young Beyoncé, Selena was already a fashion goddess in her own right. To this day, fans imitate her wardrobe in their daily wear or at costume parties.

Her critics might say that Selena Quintanilla’s outfits (especially in the 90s’) were just glitter. But there’s more to the singer’s fashion influence than glitter. Apart from embracing her culture, Selena made sure that her clothes evolved. Remember that one time she wore a traditional mariachi-style bolero jacket and paired it with a glittering purple pantsuit. How about that time she combined flashy rhinestones with cowgirl prints?

When it comes to Selena Quintanilla, her outfits always scream “Look at me!”

Her clothes were sensual, edgy and meaningful — and that’s something to keep in mind if you want to emulate the singer’s fashion. But more importantly, she broke barriers before it was cool to do so. So, it’s another thing to remember. When dressing up like Selena, you have to be confident and brave.

Whether you’re looking for a simple DIY last-minute Halloween look, costume for shows or want to channel Selena Quintanilla with your outfits, we have some DIY suggestions for remaking her iconic outfits. 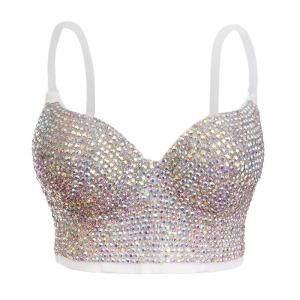 If you have a bedazzled bustier, feel free to wear it wherever you want. But if you don’t, do you have a glue gun? You’re going to need it to duplicate her iconic bejeweled bustiers.

To replicate her look, you can do what she did. Buy a soft-padded t-shirt bra and a newsboy hat, then cover them in gems. Line the perimeter of the bra’s left cup with rhinestones and décor it with random shapes and swirls.

The Silver and Red Bustier

If you want a more colorful version of the bedazzled bustier, take inspiration from the one Selena wore at the 1993 Tejano Music Awards.

The DIY fix is nearly the same as the first version. But before you get a glue gun, use fabric chalk or marker to map out where you want to place the clear crystals’ lines. Add those before you cover the rest of the cups with red rhinestones. Finish the outfit by attaching crisscrossing ribbons from the bra’s cups to the straps.

Repeat the white and red design at the top of your leggings. Use your marker to place four vertical stripes. Over those lines, attach clear crystals first before filling in the rest with red crystals.

This iconic Selena Quintanilla outfit is subtle yet still stylish. Her look in the “Bidi Bidi Bom Bom” music video is chill but incorporates some of her wardrobe staples, like shrunken vests and crop tops.

To recreate her outfit in the music video, pair a floral print midi skirt with a denim vest and white crop top. If you want to add more pizzazz, fashion your hair into beautiful beach waves.

Selena made history in 1994 with her Grammy for best Mexican/American Album, which is the first win for a singer like her. She stunned the audience with her stunning white gown, which she bought while shopping in Houston.

Create your Grammy look with a white, floor-length dress, a pretty pair of statement earrings and the iconic red lipstick.

Selena could make a button-down shirt and a plain pair of jeans look like a million bucks. And she does it flawlessly, which makes one wonder if they can do the same. While you’re not taking the stage in flared pants or a bralette, there are plenty of style lessons that you can learn from the singer’s best outfits.

When dressing up like a Quintanilla, keep the following commandments in mind.

Flared styles, ruffles, crop tops, puff sleeves and sexy cutouts — most of the time, the smallest of switches make your outfit the most noticeable of them all.

Basic Clothes Don’t Have to be Boring

Selena made clothing coordination look cool before 2020 birthed the bracket trend (and COVID-19 *sobs*). The Tejano singer loved matching her bras to her cardigans and jackets. The best part: she didn’t scare away from bold colors.

Make a Statement with Metallics

At big events, you can’t go wrong with the traditional black dress or a classic and sultry red outfit. But if you want to outshine everyone, make your outfit metallic. Everyone’s bound to notice you.

Accessories Can Make or Break Your Outfit

One of Selena’s black jacket looks is amped up, thanks to her jeweled statement earrings. So, never shy away from accessories.

Bold, brave and beautiful — these three Bs are the fuel behind Selena’s iconic outfits. Her legacy lives on not just in her music, but in the outfits that she inspires people to wear.