What did Zach Tyler Eisen Do After He Was the Avatar?

“Only the Avatar, master of all four elements, could stop them. But when the world needed him most, he vanished.”

Fans of the Nickelodeon animated series “Avatar: The Legend of Aang” have probably memorized Katara’s monologue that opens every episode. It’s one of the most memorable parts of the show, alongside the deadpan way Zuko’s voice actor, Dante Basco, delivers the infamous line, “That’s rough buddy.” Although Katara and Zuko are both very iconic characters, so is the titular avatar. Although we know what happened to the voice actors of the other characters, there’s much mystery surrounding Zach Tyler Eisen.

What did happen to Aang’s voice actor after the show wrapped up in 2008? What other roles did he pursue? And what’s he doing now?

Today, take a look at the career of Zach Tyler Eisen and learn what happened to the man behind the Boy in the Iceberg.

Zach Tyler Eisen was born on September 25, 2993 in Stamford, Connecticut. As a young boy, he started his career both in voice acting and in film. He first appeared in a 1999 semi-autobiographical film “Entropy.” During the same year, Aang’s voice actor also began voicing Andrew Mulligan in the animated television series “Little Bill.” The series was based on Bill Cosby’s “Little Bill” books.

Over the next five years, he would land a handful of roles, although nothing worth noting. His voice acting roles in these years were all for Nickelodeon. In 2000, he voiced a character on one episode of Dora the Explorer” as well as a recurring character Pablo the Penguin in another animated series “The Backyardigans.”

He appeared only in one other feature film during this time. In the 2003 movie “Marci X”, Zach Tyler Eisen had a bit role only credited as “Boy.” It wasn’t until 2005, when he became Aang’s voice actor that Eisen became famous.

Being the Avatar and Career 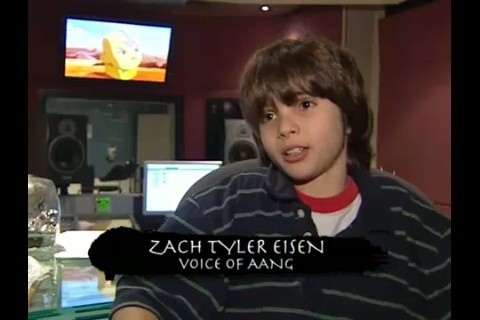 A testament to the skill of Aang’s voice actor, and the talents of his co-stars such as Dante Basco, is how natural their voices were together. The camaraderie, rivalry and affection they managed to emote through their voices helped make their characters more real and empathetic. This was considerably more difficult for Eisen because unlike his co-stars, who at least recorded from the same studio in California, he recorded his sessions alone.

Eisen was still young when he became Aang’s voice actor and rather than move to a different state, he stayed in Connecticut. He would travel to New York to record his lines alone in a studio.

His skills were so good that Eisen voiced Aang in the tie-in video games as well. From 2005 until the show ended with the epic arrival of Sozin’s comet in 2008, Eisen only had one other role. He voiced the lead character in the 2006 animated film “The Ant Bully.”

But immediately after the show ended, it was as if Eisen followed the footsteps of Aang’s predecessor, Avatar Roku. He vanished, no longer taking any television or voice acting roles and not even maintaining a social media presence in the years after. Zach Tyler Eisen simply seemed to have vanished.

In Avatar: Braving the Elements podcast. Eisen talked with Dante Basco and Janet Varney about some aspects of his phenomenal show. It was a treat for fans of ATLA since it was rare to see Eisen, let alone have him gush about the Nickelodeon series. The voice actor talked about a lot of behind-the-scenes action with the hosts, as well as his take on who should be the main ship of the show.

Was Zach Tyler Eisen a fan of Aang and Katara or did he prefer Katara with Zuko?

Without hesitation, he said that Aang and Katara. According to the actor, fans had waited for the pair to get together for the entire series. There was no better pairing than them, although he admitted that he liked Mai and Zuko together. He also said that he took a crash course on shipping when he reunited with the cast of ATLA.

He also playfully rejected Basco’s Zutara arguments, insisting that the Zuko and Katara pairing is all in his co-star’s head. But he is open to all Sokka pairings, which included Suki and Yue.

When it comes to his favorite characters or episodes, Eisen has different memories of the stories. Most of his memories are tied to the first season of the show, which is why he’s fond of King Bumi, the earth-bending king of Omashu. He was also once a good childhood friend of Aang’s. Even though a hundred years had passed, he recognized Aang as the Avatar and kept Katara and Sokka captive to keep his childhood friend around. Despite all the trials he put the trio through, they saved him.

It was during this time that Eisen felt he started to understand the characters of the show, particularly Aang. He also loved the episode “Tales of Ba Sing Se,” “Zuko Alone” and all the episodes with Guru Pathik.

Where Did He Go?

Unlike his famous role, Eisen did not freeze himself into an orb of ice. Instead, he simply made the decision to quit acting. This year, he made his first appearance on a panel in the StageIt cast reunion for “Avatara: The Last Airbender” on January 9th, 2021. During the panel, he said he simply wanted to become a normal teenager after starring in the show. Aside from this delightful surprise for fans of the show, Aang’s voice actor previously appeared on a YouTube vlog in 2020 and responded to his first interview in years. Eisen says he still keeps updated on the fandom’s activities. He also expressed deep appreciation for the creative talents behind the world of “Avatar: The Last Airbender” and said that although he prefers to remain out of the spotlight, he has nothing but love for his time being Aang’s voice actor.

Although Zach Tyler Eisen has chosen a different path than what many people expected, his departure clearly did not mark an end to the Avatar cycle. With the passing of the seasons, new voice actors have taken the role of future and past avatars, such as Janet Varney, who portrayed Aang’s immediate successor, Korra. With the launch of Avatar Studios to expand the world of the animated show, fans will have plenty to look forward to soon enough.